An integrated circuit (IC) is an electronic component which typically packages a collection of transistors, diodes and resistors to perform some useful function. There are numerous types with many package configurations. You may be familiar with fairly simple ones like Operation Amplifiers (Op Amps) or “555” timers, or complex types like microprocessors. Modern ICs are generally encased in a square/rectangular plastic package with many leads/pins. Pins are commonly spaced on a 0.1“(2.54mm) grid which will fit the holes on stripboard and breadboards. This packaging is usually referred to as Through Hole mounting as the pins normally go through holes in a PCB. Newer ICs can be found with much closer pin spacing and very small packages, usually designed for surface mounting on PCBs.

ICSP is a means whereby embedded microprocessors are 'programmed' (having their machine code loaded) while mounted in the circuit they are intended to control. There are no standard physical designs/pinouts used for ICSP.
Generally MERG modules, with PIC microprocessors, are provided with a 6 way (1 pin omitted) ICSP connector used with a 'twist' cable to a Microchip PICKIT programmer. MERG PIC ICSP cable pinout shown here.
Arduino modules use a USB connection.
AVR ATMEGA chips use a 6 pin connector based on SPI bus. (Optional on Arduino AVR modules)
Atmel SAMD chips have a OneWire ICSP (signal/0v/power).

Incandescent lamps emit light when an electric current passes through a thin wire filament, which becomes very hot and glow brightly. Filament lamps may have a shorter lifetime than most electronic components because the filament could melt at a weak point. Incandescent lamps, such as the tiny “grain-of-rice or grain-of-wheat” lamps shown in the second image, have been used for decades as model engine lights, signaling lights and for layout structure lighting. There is a movement to replace incandescent lamps with light emitting diodes (LEDs) which use less power, generate less heat and typically last longer.

A method of preventing a C or C++ header source file (.h or .hpp), from being included more than once by other files. It uses 'compiler directives' # to do this.

If the compiler supports it, then following can be used

An inductor is a coil of wire which may have a core of air, iron or ferrite (a brittle material made from iron). Its electrical property is called inductance and the unit for this is the Henry, symbol H. 1H is very large so mH and uH are used, 1000uH=1mH and 1000mH=1H. Iron and ferrite cores increase the inductance.
Inductors are mainly used to tune circuits and to block high-frequency AC signals (they're sometimes called chokes)
They pass DC easily, but block AC signals; this is the opposite action to a capacitor.

These are light emitting diodes (LEDs) which emit light outside of the visible light spectrum. IR emitters are generally mounted in plastic with clear or smoke color lens. 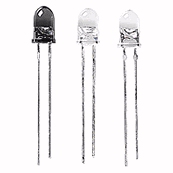 There are two common types of IR detectors, a phototransistor or a photodiode. These detectors are fabricated to detect light in the IR spectrum.

Description used by UK track manufacturer, PECO, to denote turnouts manufactured with an insulated common crossing, AKA frog. This avoids the need for polarity switching for the crossing at the expense of poorer current collection for locomotives. AKA dead frog.

Name for a means of linking the operation of points and signals such that signals can only show a proceed aspect when points are correctly set, and that points cannot be moved unless the signals over them are showing stop aspects. Interlocking can be mechanical, electrical using relays or carried out by computers.

An Interrupt Service Routine is a firmware/software program subroutine (sub-program) triggered by a microprocessor hardware pin. When triggered, the processor will temporarily execute a subroutine then return to the previous program execution. An ISR can be used to make the processor immediately take care of a time critical operation. While there are many uses for an ISR, some common uses would be for receiving serial bits from a serial data interface or sensing an external clock signal to trigger the sending of video signals at a precise time. In some cases there are more than one interrupt trigger pin or indication. Because of this there may be priority settings. A High priority interrupt cannot itself be interrupted whereas a Low priority interrupt can be interrupted by a High level one. This helps keep multiple ISRs from interfering with each other.