A Hall effect sensor is a semiconductor device often looking like a small transistor. When the device encounters a magnetic field it generates a voltage. There are many uses for a Hall sensor such as measuring the speed of a fan or replacing the points in a automobile distributor (detects speed and position to fire the ignition). In the context of the MERG site, a Hall sensor might be used to detect a passing train, which would have a magnet mounted under it, to close crossing gates or change track signals.
See MERG TBs A7/2/ 3/ 4 (MERG members only)

A handset is usually a controller you would use while holding it in your hand to control a train engine, turnouts or track animation. 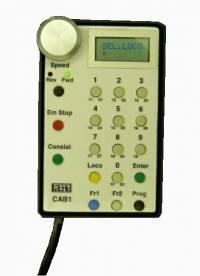 Handshaking is a process that allows two or more devices to establish communications, and control data being passed between each device. A common example would be when a PC printer port communicates with a printer. A communication is setup and then the handshaking process controls the text being sent to the printer, to only send as fast as the printer can accept it. You may, for example, have seen “software” or “hardware” flow control handshaking as settings in a serial terminal program on a PC.

A term devised and introduced in the documentation for the MERG Universal CANMIO, for an event that is internal to the module to distinguish it from an external event (on the bus). For instance, say input 1 changes from high to low. In early modules of the CBUS range this would simply produce an ON event with EN (Event Number) of 1. In the Universal code for the CANMIO it produces a 'Happening' event with a value that indicates input 1 ON. Through the configuration process this may be mapped to produce that same event or something entirely different.

HASL, or Hot Air Solder Leveling, is a process of coating the bare copper of an etched PCB with something like solder or varnish (solder mask). This keeps the PCB traces from oxidising over time, which makes the traces harder to solder to. The standard HASL provided by Chinese manufacturers is leaded solder. More expensive options are lead free solder, organic solderable varnish stuff, nickel, or gold flash.
Hot Air Solder Leveling

A header plug is generally a row of pins soldered to a PCB. A header socket is a mating connector that plugs onto a header socket. This is a common way of interconnecting two PCBs, or a PCB with an LCD module. You may also find header plugs used with a type of plastic covered jumper block to short two pins together in place of using a switch.

Waste heat can be produced in semiconductor devices due to the current flowing through them. You will typically see these mounted on power transistors and voltage regulator devices (like LM7805 voltage regulators) providing a much greater surface area for the heat to dissipate (transfer) to the surrounding air. They are generally made of aluminum and often have fins. In some high power applications it may be necessary to use a fan to blow air across the head sink to keep the semiconductor device cool.

This is a track detector (ToTi) using an optical system to detect the location of a train. Merg kit (for members only)

Computer data is a collection of binary bits, ones and zeros. Programmers generally collect bits into convenient sets of four bits (a nibble) or eight bits (a byte).

When it comes to writing and speaking the values of bits, rather than saying the value is 10010011, it is simpler to break the bits into small chunks and use a different number system. In the past collecting sets of three bits was common (Octal or base 8) but today sets of four bits are generally used (Hexadecimal or base 16).

When a hex number is used in a program or written text, it is usually proceeded by some characters to identify which number system you are using. Consider the number 100. In decimal this is one hundred. In binary this is four. In hex it is two hundred fifty six (0001 0000 0000). If you mean 256 then some programmers and programs would put a letter combination such as '0x', '0h' or # before the number (0x100) or a letter such as H or h after (100h). In the MERG forum you will generally see hexadecimal 100 shown as 0x100. ASCII Hex encoding When sending numeric information over a serial link such as RS232 or RS485 it is not possible to send it as raw binary data as some of the possible 256 byte values have special meaning and are used to control the information flow, for an explanation of this see ASCII. Instead each data byte is split into two hexadecimal digits and transmitted as text. For example the value zero, which would be 8 zero bits is transmitted as '00' that is <0x30><0x30>, value 255 which would be 8 one bits becomes 'FF' that is <0x46><0x46>.

There are situations where there are two levels to a signal, which we commonly refer to as High (1) or Low (0). In the case of logic chips, a high (1 condition) is generally a voltage above 2/3 of the supply voltage. In the case of a transistor device, it may be a voltage high enough to turn a transistor on (to make current flow between emitter and collector). This may require several volts on the base. A low is the opposite condition where a smaller voltage, often near ground, is required to produce a low (0 condition) or turn off a transistor.

A common characteristic designed into an electronic circuit is called hysteresis. As an example, you may have noticed that most temperature controls for home heating have a couple of degrees of change between off and on. In order to keep the heater from rapidly/constantly cycling on and off, the temperature is allowed to drop a degree or two below the setting before the heater turns on to warm the room back to the setting, then turns off. The heater control is said to have hysteresis. This same process is sometimes used in electronic circuits to prevent circuits from oscillating around a single set point. Generally hysteresis is implemented by setting thresholds that a voltage must be above or below before the circuit takes some action. When you encounter an IC logic chip said to be have a “Schmitt Trigger” input, it means that the input voltage must rise above a trigger level, let's say four volts, before the output goes high. A Schmitt Trigger device has hysteresis so the input may need to drop below, let's say, one volt before the output will switch low. In this example, the input voltage can vary between one volt and four volts and the output will not change.

A similar effect can be seen in ferromagnetic materials acted on by a magnetic field. When a ferromagnetic material is magnetized in one direction, it will not relax back to zero magnetization when the imposed magnetizing field is removed. It must be driven back to zero by a field in the opposite direction. Because the material retains a magnetic polarity after it is magnetized in one direction it can be said to have memory. This “memory” is leveraged in making disk drives and magnetic tape drives.

The graph of the magnetic field of a ferromagnetic material, as it is magnetized through both polarities, forms a characteristic loop shape.
Hysteresis

Within the MERG group, the term is also used to refer to one of the display modules often seen on the MERG exhibition stand. This is because the track layout on the module resembles the graph of a hysteresis loop.